Webcam with a view of Malaya Nevka and Bolshoi Petrovsky Bridge, Saint Petersburg

Webcam at the crossroads of Shevchenko and Muravyov-Amursky in Khabarovsk

Webcam at the nest of the Lesser Spotted Eagle, Latvia

Webcam at the crossroads of Turgenev and Muravyov-Amursky in Khabarovsk 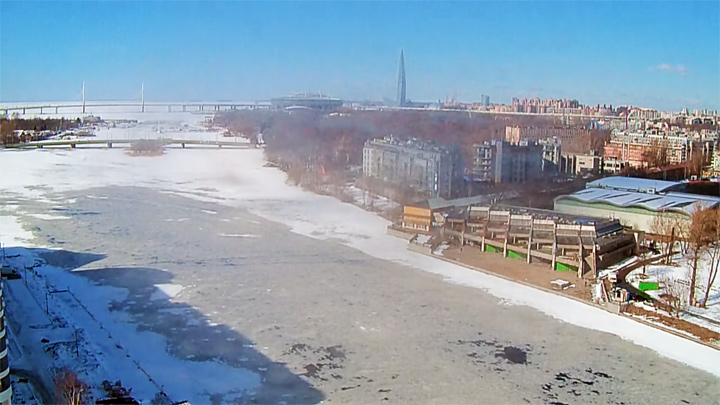 Webcam with a view of Malaya Nevka and Bolshoi Petrovsky Bridge, Saint Petersburg

Live webcam shows a view of the Malaya Nevka River and the Bolshoi Petrovsky Bridge in the Petrogradsky district of the city of Saint Petersburg. The camera is located on the high-rise building of the Premier Palace residential complex and looks towards the Bolshoi Petrogradsky Bridge and the Petrovsky Fairway. On the live broadcast from the online webcam you can also see the WHSD bridge across the Petrovsky fairway, Gazprom Arena, Lakhta skyscraper center. On the right side of the broadcast you can see the building of the Dynamo Tennis Club.

The length of the Bolshoi Petrovsky Bridge is 295 meters. It connects Petrovsky and Krestovsky Islands (Savina Street and the South Road, respectively). The bridge was built across the Malaya Nevka river over a small nameless island.