Webcam at the intersection of Vasilyev / March 8 in Biysk

Webcam at the crossroad of Razin/Lipovy, Biysk city

Webcam at the intersection of Nevsky - Pravda

Webcam at the crossroads of Gorky/Pine, Biysk

Live webcam shows the square named after S.Yu. Medvedev in the city of Biysk, Altai Krai, Russia. The camera is installed on the Lnokombinat Street, house 21 and is directed towards the Monument to warriors-textile workers and the Cultural and Sports Center. On the broadcast you can see in real time the traffic situation at the intersection of Lnkombinat Street and Granichnaya Street.

By the Decree of the President of Russia N484 of March 12, 2000, for the courage shown in the liquidation of illegal armed formations in the North Caucasus region, the guard of the senior sergeant of the contract service Medvedev Sergey Yuryevich was posthumously awarded the title of Hero of the Russian Federation.
Geography: Lnokombinat. Time zone: GMT+06:00
Broadcast quality: video, 360p. Status: webcam is offline (checked).
Category: squares, traffic.
Source: video.digibi.ru 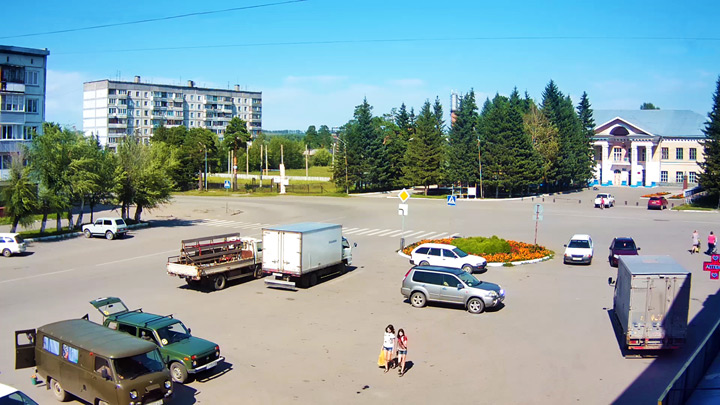