Webcam at the sarcophagus of the Chernobyl Nuclear Power Plant

Webcam on Orangery Street in Pushkin

Webcam in the English Quarter in Anosino Village
Rating: 0/5 (votes: 0)

Webcam at the sarcophagus of the Chernobyl Nuclear Power Plant

The existing shelter, formally referred to as the Object Shelter and often called the sarcophagus, was constructed between May and November 1986 as an emergency measure to contain the radioactive materials within reactor unit 4 at the Chernobyl nuclear power plant (ChNPP). The shelter was constructed under extreme conditions, with very high levels of radiation, and under extreme time constraints. The Object Shelter was moderately successful in containing radioactive contamination and providing for post-accident monitoring of the destroyed nuclear reactor unit.

Currently existing object «Shelter» is short-lived. Under the influence of radiation and external factors, it is gradually degraded. February 12, 2013 a few of hinged panels collapsed above the engine room power, the collapse area was about 600 square meters. meters. These «holes» in the sarcophagus represent a radiation hazard for the local population, since under its floors is still about 200 tons of radioactive materials.
Geography: Pripyat. Time zone: GMT+03:00
Broadcast quality: video, 360p. Status: webcam is offline (checked). 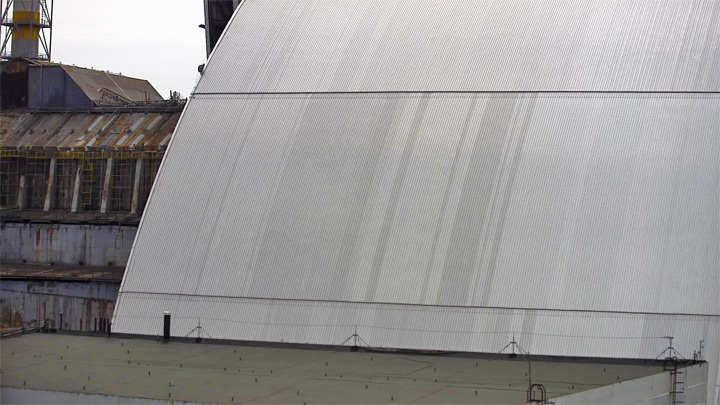 Interesting shots with the webcam: 1
new cams: Webcam on the Admiralty Embankment in St. Petersburg.