Live webcam broadcasts a view of the Jubilee and Komsomolsky bridges across the Om river in Omsk. The camera in real time allows you to admire the views of Omsk or find out the current weather in the city. The near bridge on the video broadcast is the Yubileyny Bridge, followed by the Komsomolsky Bridge located upstream of the Om River. If you take a good look, then you can see the Frunzensky Bridge, followed by the October Bridge.

The building with a big bright roof (on the right part of the live broadcasting) is the Omsk Music Theater. In front of it is the Theater Square. Further, in the direction of the viewer, Leninsky Garden, a monument to V.I. Lenin and Lenin Square. To the right of the Musical Theater you can see Lermontov Street, to the left — Dumskaya Street and the City Council building.

The Jubilee Bridge was built in 1967 instead of the old movable Iron Bridge of 1903, which connected the territory of the old Omsk fortress with the new one.

Komsomolsky bridge was built in 1953. It connects the October and Central districts of the city of Omsk.

The Frunzensky Bridge was built in 1988, located at the junction of the streets of Marshal Zhukov and Frunze. Earlier in its place was a wooden bridge.

The high quality of webcam transmission allows real-time estimation of the intensity of car traffic on bridges and adjacent roads.

Webcam on the «Fakel» bridge in Salekhard city, Russia

Webcam at the crossroads of Shevchenko and Muravyov-Amursky in Khabarovsk 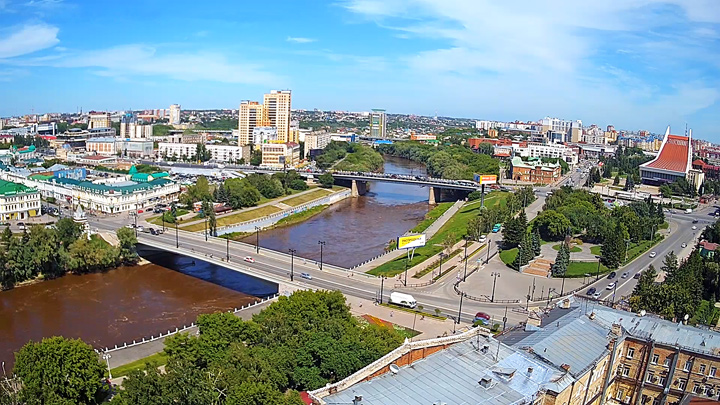