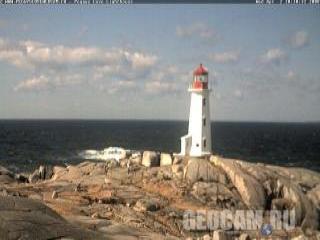 According to legend, Peggys Cove was named after the only survivor of a schooner that ran aground and sank in 1800... a woman named Margret. Local folk called her "Peggy" and her home came to be known as Peggys Cove. The original lighthouse was built in 1868. Exactly 100 years later in 1968 the Campbell family opened a five-table tea room and the Sou'Wester was born.
Geography: Canada. Time zone: GMT-05:00
Broadcast quality: mjpeg, 480p. Status: webcam is online (checked).
Source: www.novascotiawebcams.com