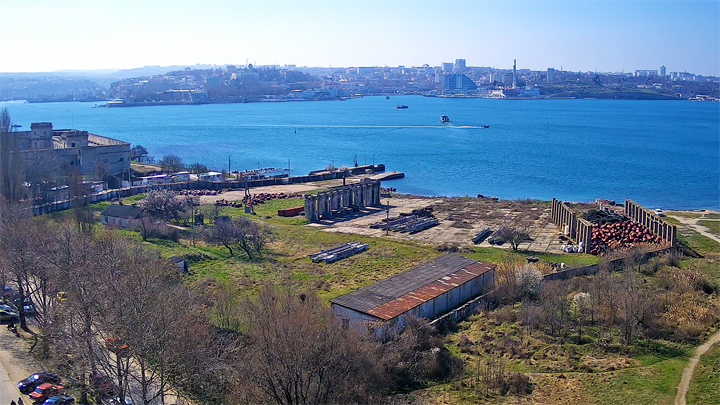 Live webcam is installed on the Radiohill of Sevastopol city. The camera in real-time shows a panoramic view of the central part of the city from the North Bank of the Sevastopol Bay. The left side of the live broadcast shows the Mikhailovsky Battery (Mikhailovsky Ravelin), which now houses the Military Historical Museum of fortifications. To the right of the ravelin in the Matyushenko bay there is a berth for passenger boats plying through the Sevastopol bay between Radiohill and the Artillery Bay.

Radiohill (Radiogorka) is the name of the neighborhood located on the northern side of Sevastopol city, on the northern shore of the Sevastopol Bay. Radiogorka is part of the Nakhimov city district. Radiogorka received its name in connection with the events that took place here at the beginning of the 20th century. Here A.S.Popov experienced radio communication for the first time in world history.
Geography: Nakhimov District. Time zone: GMT+03:00
Broadcast quality: video, 720p. Status: webcam is online (checked).
Category: bays.
Source: sevstar.net

Webcam on the square of the 300th anniversary of the Russian Navy: Artillery Bay

Webcam with a view of Tsemes Bay, Novorossiysk