Webcam on the Revolution Fighters Square in Vladivostok

PTZ webcam with a view of the Golden Horn Bay, Vladivostok

Webcam on the square of the 300th anniversary of the Russian Navy: Artillery Bay

Webcam on the Revolution Fighters Square in Vladivostok

Live webcam shows the Square of the Fighters of the Revolution in the city of Vladivostok in real time. The camera is installed on Svetlanskaya Street and is directed towards the Revolution Fighters Square and the Golden Horn Bay. On the right side of the live broadcast there is a monument to the Fighters for Soviet Power in the Far East. In the background, on the left, you can see the exit from the bay.

Revolution Fighters Square is the central square of the city of Vladivostok. The square is the historical and architectural center of Vladivostok. The ensemble of the square is made up of famous sights, many of which are objects of the cultural heritage of Russia: the Monument to the Fighters for Soviet Power in the Far East, the City of Military Glory Stele, the House of Soviets, Katchan's Apartment House, the Trade Passage, the Tau-Tse Lin Apartment House, Dalrybvtuz building, Johann Langelite House, Kunst and Albers Partnership House, Ussuri Cinema, Kunst and Albers Partnership House, Briner, Kuznetsov and Co. Trading House Office, Transfiguration Cathedral.

Live webcam on the Revolution Fighters Square in Vladivostok broadcasts around the clock. The broadcast is in real time and works on all types of devices. The camera is installed on the building at the address: Vladivostok, Svetlanskaya Street, 31.
Geography: Vladivostok. Time zone: GMT+10:00
Broadcast quality: video, 720p. Status: webcam is offline (checked).
Category: squares. 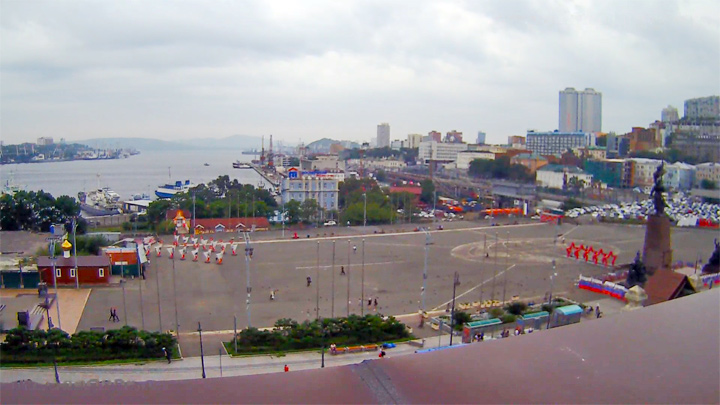