Live PTZ webcam shows the Sanxiantai area in Taiwan's East Coast National Park in real time. Sanxiantai is a beach and multi-island area located on the coast of Chenggong, Taitung County, Taiwan. The beach is ten kilometers long. The area is well known for its long sea dragon-shaped footbridge that connects the coast to the largest island. The bridge can be seen in this broadcast in one of the positions of the PTZ webcam. The name Sanxiantai means «platform of three immortals», referring to an island with three large standing rocks.

Sanxiantai is a geological rock that turned out to be a cape. The gradual erosion destroyed the cofferdam connecting the mainland to the main island, and thus the rock became coastal islands. Tourists who previously visited this place could only reach the island at low tide. In 1987, the government completed the construction of an eight-arch bridge across the sea that leads to the island. It was designed in the form of a sea dragon-like wave and connects Sanxiantai with the island of Taiwan. It has become the most famous landmark on Taiwan's East Coast.

The entire territory of Sanxiantai is about 22 hectares with the highest point at 77 meters above sea level. There is a trail that goes around the island and you can get around it without haste in about 2 hours. The island is surrounded by coral reefs. Due to the strong weathering and erosion that formed the basis of legendary stories about the natural landscape, such as the holes of Xian Jian Gap He-huan and Sansyantai, there are also some natural attractions around, such as scattered sea trenches, sea caves, sea columns, sea ​​walls.

Webcam on the sandbank of Kuredu Island, Maldives 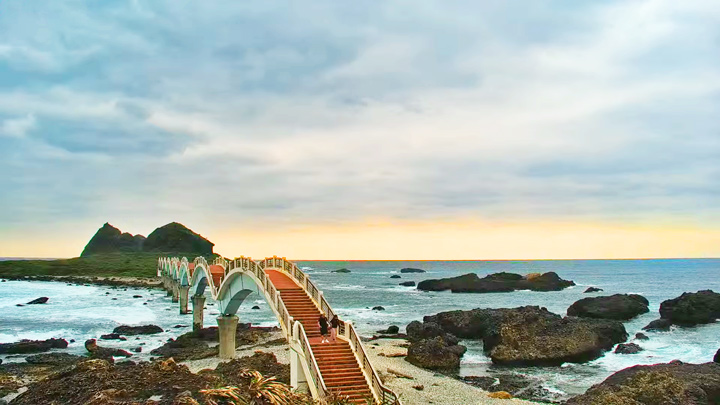