Webcam on the beach of the complex «Our Sail», Kacha, Sevastopol, Crimea

Webcam with a view of Tsemes Bay, Novorossiysk 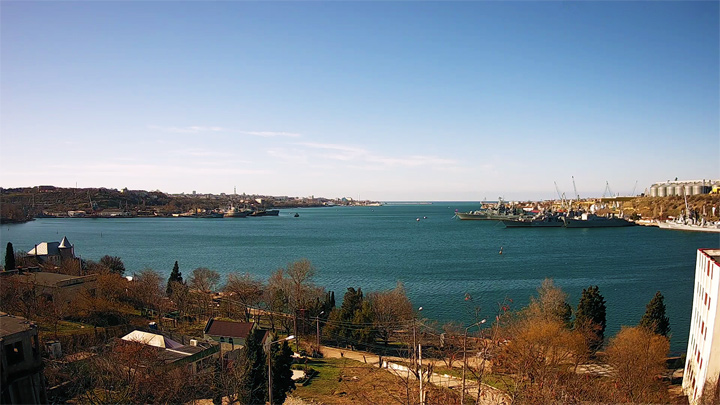 Live webcam broadcasts a view of the Sevastopol roadstead in real time. The camera is installed on Kurchatov Street, house 12 and shows a view of Sevastopol Bay and the entrance to it. The video broadcast from the web camera clearly shows the military ships of the Black Sea Fleet of Russia.

Sevastopol Bay was named after its founding on the shores of Sevastopol city. Until this time, at different times the bay was called differently: the Sevastopol roadstead, the Main roadstead, the Inkerman Bay, the Chersonese Estuary, the Great roadstead, the Big Bay, the Korsun Sivash, the Akhtiar Harbor, Kalamita-Liman, Ktenus, Ktenunt.

Sevastopol Bay is the largest bay of the city, and the length of its coastline exceeds 25 kilometers. Inside the large Sevastopol bay there are 19 small bays: Mikhailovskaya, Konstantinovskaya, Yuzhnaya, Sukharna, Bay of Holland (this bay is visible on the right side of the webcast of the Sevastopol roadstead), Artillery, Matyushenko, Severnaya, Staroseyernaya, Engineering, Aleksandrovskaya, Mayachnaya, Crystal, Dock, Oil Harbor, Ship, Martynova, Apollonova, Kilen-bay.

Sevastopol Bay is the most convenient bay in the world for basing the navy. And for the convenience of placing ships and navigating with Sevastopol Bay, only two bays in the world can compete: Hong Kong Bay and Sydney Bay. Therefore, on the web camera of the Sevastopol roadstead you will always see ships: both military and civilian vessels.

Broadcast from the live webcam of Sevastopol roadstead carried out around the clock in high-definition format FullHD. With the help of the camera you can admire the ships, the sea horizon. On holidays you can watch online fireworks and salute.
Geography: Nakhimov District. Time zone: GMT+03:00
Broadcast quality: video, 1080p. Status: webcam is offline (checked).
Category: bays.