Webcam at the Freedom Monument in Riga

Webcam at the Freedom Monument in Riga

Opened in 1935, the Freedom Monument, thanks to its importance, location and size, has become one of the most recognizable sites in Riga. And the adjoining square, in due course, became a favorite meeting place.

The final part of the monument is Milda: the female image that stands on the obelisk with arms stretched to the sky with three stars. Each of the stars symbolizes one of the cultural and historical provinces of Latvia: Kurzeme, Vidzeme and Latgale. The total composition consists of thirteen different bas-reliefs and sculptures.

The area around the monument is part of Brivibas Street between the boulevards Raina and Aspazijas, which in 1990 was closed to traffic. The area of ​​the Freedom Monument is open to pedestrians and cyclists. Its location makes it a connecting link between Old Riga and the rest of the city.
Geography: Riga. Time zone: GMT+03:00
Broadcast quality: video, 720p. Status: camera works intermittently (checked a month ago).
Category: monuments, sights.
Source: Baltic Live Cam

PTZ webcam in the center of Sevastopol city 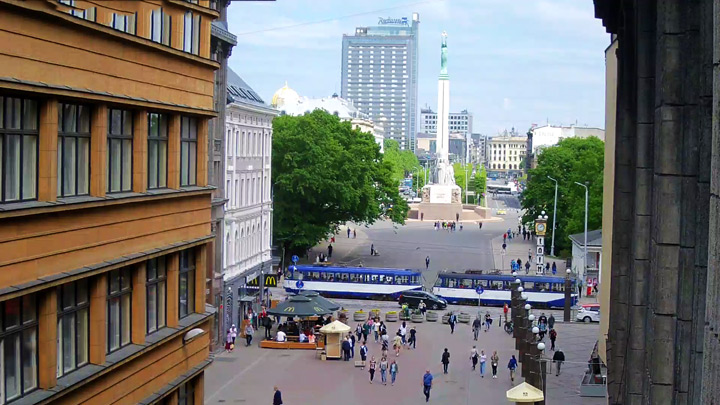