Hopewell Rocks are located on the shores of the upper reaches of Fundy Bay at Cape Hopewell, close to other local tourist attractions such as the Fundy National Park and the Fundy Trail. Due to the extreme tidal range of the Bay of Fundy, twice a day, the rocks sink into the water almost to the very tops and reopen.

Rock formations consist of dark sedimentary conglomerate and sandstone. After the retreat of glaciers in this part of North America after the last ice age, surface water penetrating through cracks in the rock destroyed and separated formations from the rest of the rock. Meanwhile, the upcoming and retreating tides and the waves associated with them, destroyed the base of the rocks faster than the peaks, which caused their unusual shape.

Visitors to the park are advised to take a look at Hopewell Rocks twice a day to get an idea of ​​the full tidal cycle. Although the height of the tide varies from day to day, on some days the tide can reach a height of 16 meters, making Hopewell cliffs considered to be one of the highest tides in the world.

On March 14, 2016, part of one of the ridge rocks — the Elephant Rock — collapsed. According to the staff of the park, the total mass of the fallen part was about 100-200 tons.
Geography: New Brunswick. Time zone: GMT-04:00
Broadcast quality: video, 720p. Status: camera works intermittently (checked).
Category: sights.
Source: thehopewellrocks.ca 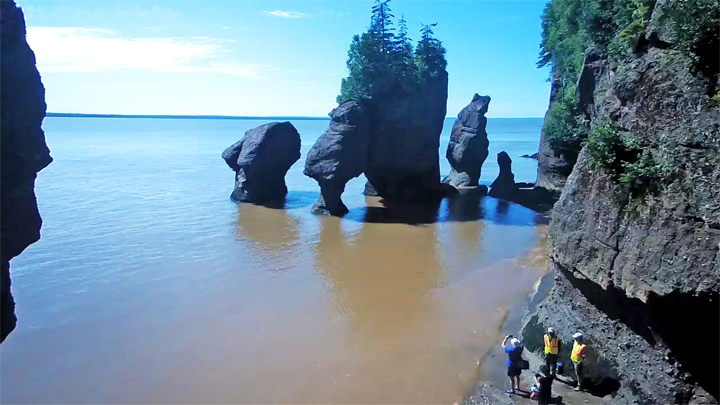 Interesting shots with the webcam: 3
new cams: Webcam on Vosstaniya Street in Saint Petersburg, Russia, Webcam at the intersection of Petersburg Highway and Detskoselsky Boulevard.